The Robosapien V2 I purchased did not come with battery covers for the bottom of the feet: 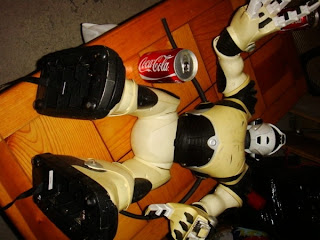 So If I'm going to ever get this robot up and running, I'll need to figure out a way to re-manufacture some kind of battery retention strategy.

Time to give this robot some sole.

First thing to do is to make the existing feet as flat as possible by removing all of the accessories connected to the feet - to strip it right back.

Here's what got removed - a bunch of plastic "bumps" that were connected to the feet as well as a couple of silk ribbon strips which (I guess) were used to aid the removal of the "D" batteries that are held in the feet. 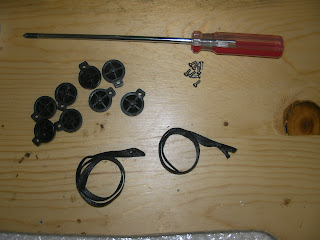 Close up of the "bumps".  Will be putting them back on later, I am sure. 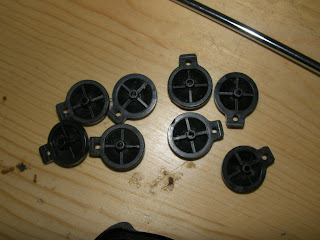 Here's what the feet look like with all of the extra stuff removed. 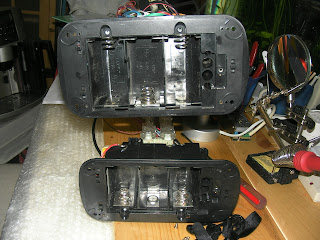 Close up of the bottom foot (LEFT) 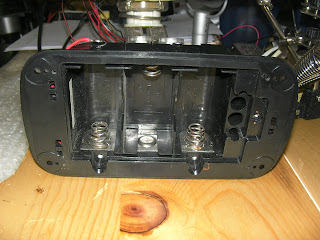 The material I am going to use to re-manufacture the bottom of the feet is a piece of black plastic I had hanging around the house.  I have no idea where it came from - I probably snagged it one day, "just in case".  This is the kind of behaviour that just often enough pays off for me to persist with it, but seldom enough that it drives the wife CRAZY with what seems to her to be piles of meaningless junk appearing in the house. 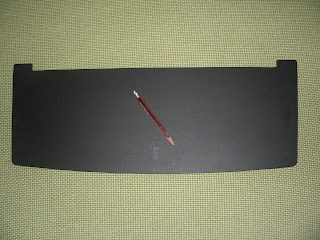 I just plopped the foot of the Robosapien V2 on top and traced the outline.

There were four nice holes available, so I traced them too. 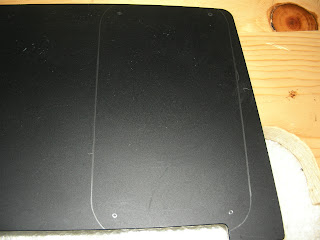 Score plastic along straight edge about 5 times (make it deep).

Place cut line on straight edge, with piece you want to snap off dangling over space.

Lean briskly as you hope for a clean break. 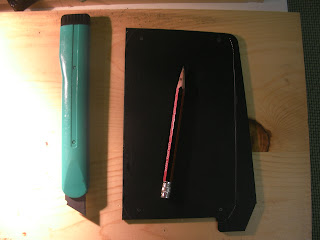 The rest is a little trickier because there are these little curves involved at the corners.

Score plastic as before, but be sure to also place evenly spaced lines to help energy "go somewhere" as you flex it and break it.

The score lines also help to break the problem down into achievable segments.

Here's what I did: 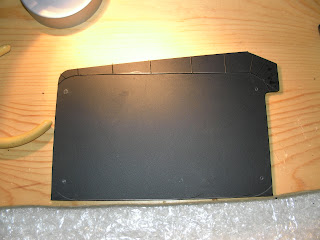 Now, use a pair of diagonal cutters to start the break.

Diagonal cutters can put a HIGH amount of cutting energy in a VERY concentrated area into a quite SMALL area - exactly what we want to do!

Here's what I managed with my first "bite": 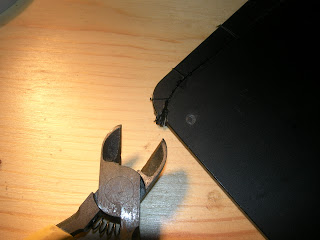 The next tool is our old friend, needlenose pliers.  They enable PRECISE application of torque energy in a VERY concentrated way - exactly what is required next.

Here's what I managed with my first "twist": 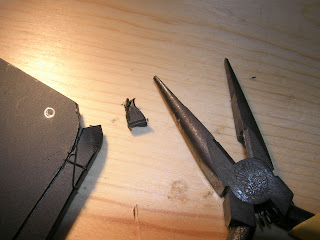 As you can see, things are going swimmingly.

Proceed along scored line with needlenose pliers, breaking away segments as you go:

Here's what I accomplished: 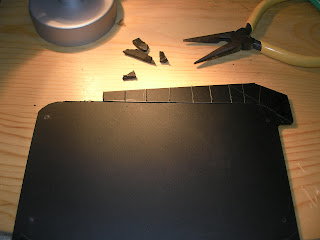 Almost done - no mishaps yet.

Note that at one point the twisting produced a break that did not follow the scored lines.

Instead, it moved AWAY from the material we wanted to preserve and broke in a nice exponential curve to the next score line in the series. 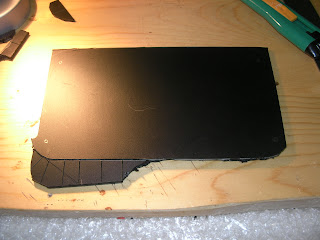 For the second foot I decided to make a paper template because the first one ended up not being quite perfect: 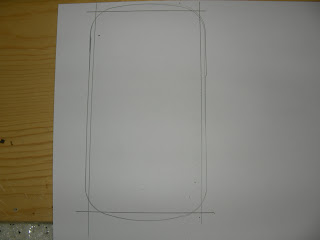 Second foot plate measured out, ready for scoring and breaking off... 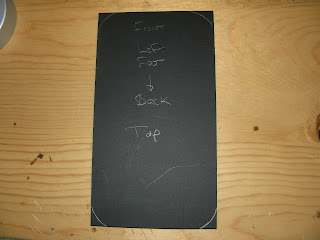 First and second foot plates after being scored, broken off and filed a little bit to remove any rough edges: 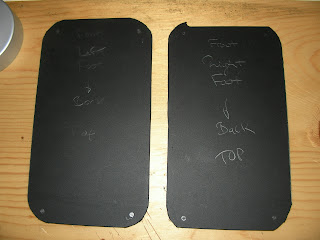 First foot plate affixed to the foot of the robot with bolt / washer / nut: 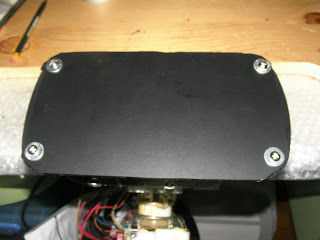 What the foot looks like with the RETREAD on:

You can hardly notice the extra layer on the bottom. 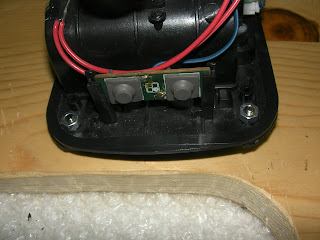 Robot with both RETREADS affixed. 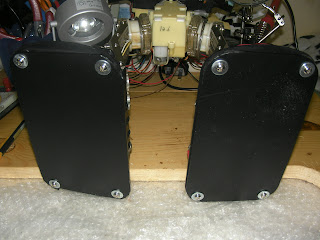 Robot standing on its RETREADS 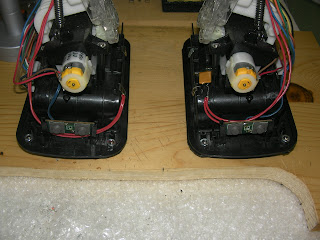 The only thing left to do with the "retread" project is to now figure out how to go about bridging the two "AAA" batteries in the feet.  Here's what they look like right now with the batteries installed:

<photo of batteries inserted - not level>

This is not good.  I've got to figure out a way to get those batteries level.  One way to do it is to install another spring in the "AAA" socket of each foot of the Robosapien V2 so the batteries come up to the same height with respect to each other - then figure out a way to install an integrated bridge (metal strip) into the material of the new feet - which should also make the "right side up" of the feet super clear and basically make putting them on the "wrong" way around impossible.

Then again, maybe there's a faster way - aluminum foil is highly malleable and an excellent conductor... 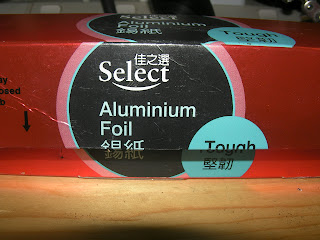 Here's the brand of aluminum foil I used.

About as generic as they get... 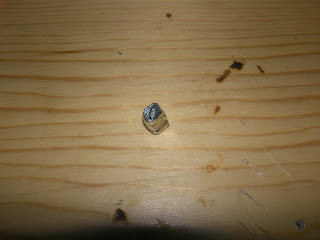 I created a cylinder of aluminum foil about 2 cm high and 1 cm in diameter.

Then I cut it in half, creating two semi-solid "plugs" of aluminum.

I inserted the batteries and "mashed" down the one sitting on the plug until it was level. 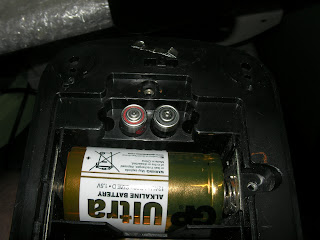 Now the "AAA" batteries are sitting nice and level with each other.


Next fabricate a little bridging strip for the exposed ends from more aluminum foil. 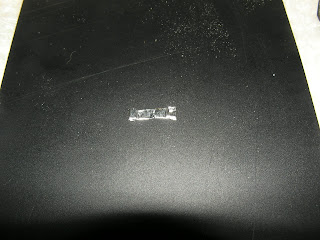 The purpose of the bridging strip is to put the batteries in series so you get 3v.


Close up of bridging strip: 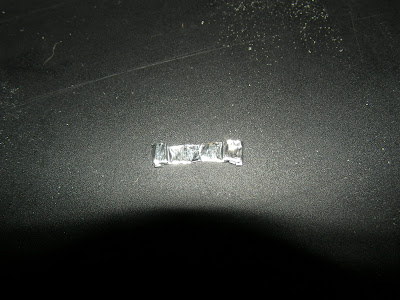 Here's a close-up of the bridging strip. 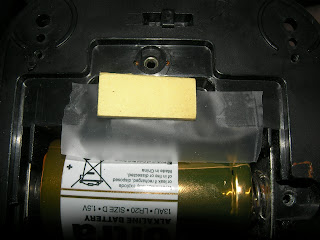 Finally, hold the bridging strip in place with some scotch tape and then cover with some double-back foam to ensure that a good connection is created when the foot covers are screwed back on.


OK, I believe that my Robosapien V2 RETREAD Project is absolutely done.