In the V1 generation of the Robosapien, the skeletal structure is independent from the body panels.  You can take off all of the "coverings" and the machine below is 100% functional.

Not so with the Robosapien V2, which is a shame.  If you want to get at the circuit boards of the Robosapien V2, you have to do without the arms.  I don't know who thought of that (or why), but I think it's a real shame.  Maybe it has something to do with the arms wiring harness leaving the body panels at the waist and entering the arms at the elbows?

In any case, at the time I took it apart, I knew nothing about the way the robot was constructed and so was made quite anxious by this event of wires getting broken off when the robot fell into pieces on my workbench...eeek!

At that time, pretty much the only things I knew about those two broken wires was what I could see:

I have since determined that this is the connector and wires for the LEFT FOOT MOTOR (robot orientation).

Immediately below the yellow connector is a  white connector which I used as a reference in terms of what wire connected where, hoping that the two connectors were wired the same way.  The white connectors also had red and brown wires connecting to it and they led to the RIGHT FOOT MOTOR (robot orientation). 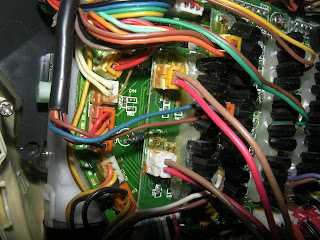 Why are the Robosapien V2 foot motor wires brown and red?  I do not know.


Seeing as I know him personally, I asked the designer, Dr. Mark Tilden, to help me by explaining some aspects of the power arrangement in the Robosapien V2.  I was especially interested in the way the batteries were configured (3 x "D" cells + 2 x "AAA" cells).

He also commented that in later iterations of his own (and others) robots the power isolation/management had been simplified and so too was the battery strategy.

I got a bunch of super useful information about the Robosapien V2 Motor Control Board from a couple of really targeted Robosapien websites, EVOSAPIEN and ROBOGUIDE:

I include the images below for both convenience and safety.  Both of the above websites are looking distinctly long in the tooth and EVOSAPIEN has not been updated for almost SEVEN YEARS:

(please, I want to capture this information just in case either site just winks out, which would be a real shame.  I'm just playing safe - please don't yell at me for snatching images...) 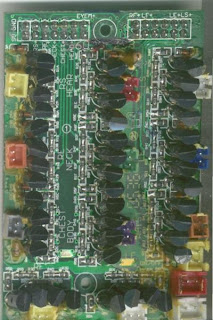 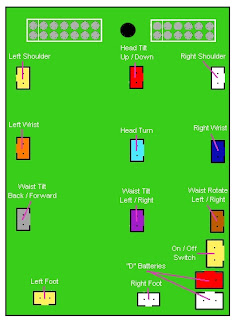 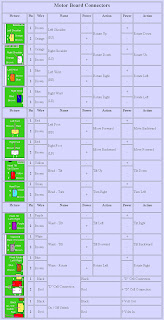 OK, the above is wonderful and I am really grateful to nocturnal for the resource.

But what if your Robosapien V2 Motor Board doesn't look like the one picured above?

I ask this question because mine doesn't!

Take a look for yourself: 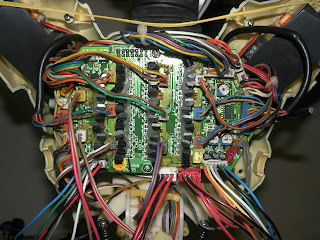 Here's a block diagram of my Robosapien V2: 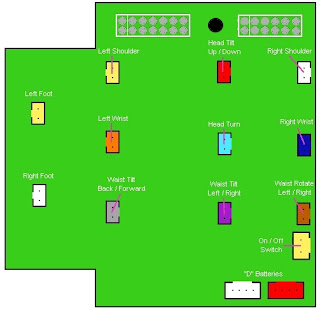 My "Exotic" Robosapien V2 Motor Board

Apparently, my RSV2 is either non-standard, or a different variation /generation:
The pinouts for my board are basically the same, with these differences:

I suggest that people take careful note of the motor orientation when re-wiring the Robosapien V2.  I used the "D" shape of the yellow core of the motor as a reference for wiring orientation because I noticed that the motor is actually flipped 180 degrees between the two feet. 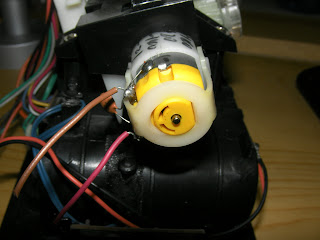 This foot is sane

On this foot we have two red wires connecting to the foot motor... 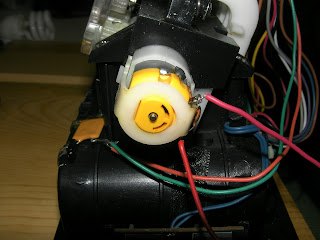 This foot is insane

So, I took a brown wire from my lovely bunch of 10-Core wires and placed it where it should go... 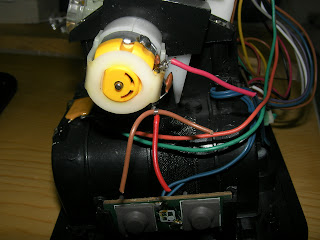 I then cut off the red bottom wire and took another photo with a white background in place because brown and red are actually pretty close to each other, colour-wise: 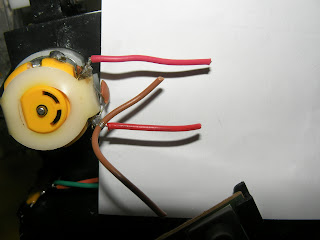 Replacement brown wire in place with white background to help with contrast and color identification.

Here's an excerpt from an interview where Dr. Tilden talks about the motors inside the Robosapien V2:


"What kinds of motors are involved? "

"We build our own custom motors and gearboxes, pushing the concept of “toygrade” to the limits while still keeping costs low. In the RS2 we use 12 standard M130 motors for all actions, with a single M21 motor for the eye action. This type of modularity keeps costs low while encouraging high reliability. It’s always amazing how consistent a component gets when you order 27 million of them."

I looked up M130 and M21 motor types mentioned in the article and couldn't find anything except for Mercedes Benz engine types.  Huh?