I really want the Robosapien V2 to have a lower cost and more eco-friendly power solution than its existing approach, which is to use disposable (alkaline) batteries.

Now, I haven't even really started thinking about this project much, nor planned it in any formal sense, but here's some assorted musings:

My initial thoughts are to use a customized Lithium Ion Battery Array installed in a "platform sole" a la Elton John shoes with at least one in situ recharging circuit, maybe two.

For those of you born in more recent times, Elton John, CBE is an English musician made famous for his great music, showmanship and flamboyant sense of style.  His wardrobe frequently features very high platform shoes.  Here's Elton captured in an artistic moment, shoes prominently displayed for all to see: 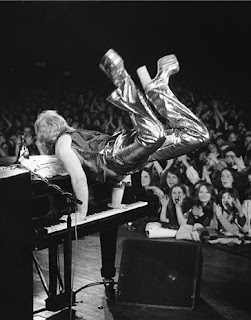 Hey, the guy's a Commander of the Most Excellent Order of the British Empire, that for his contribution to the culture of the United Kingdom and the world beyond..so why not copy his style?  For the curious, here's those shoes again, in color: 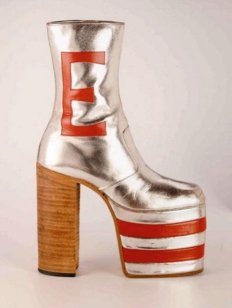 
As a fashion statement, Mr. Roboto could do worse than the above...a lot worse: 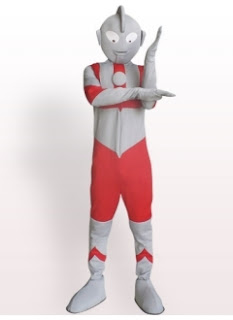 You may ask "Why Lithium Ion batteries"? for Mr. Roboto (who shall be re-christened "Elton" when his shoes are finished).  My answer is that they have excellent performance characteristics.

But were I pushed to the wall and asked the true reason why I am toying with the idea of using Lithium Ion batteries to power the Robosapien V2, I would have to say this:

Laziness mostly...and because I already have almost all of the parts in my junk pile.

Recently I went about pulling apart an old DELL laptop battery I had in a drawer for about a year.  It wasn't really making the grade as a laptop battery any more, only powering the laptop in question for about 1 hour when in the past it had given up 4 to 6 hours. 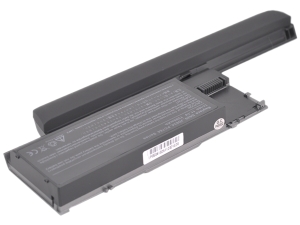 Here's the batteries that came out of it in the end: 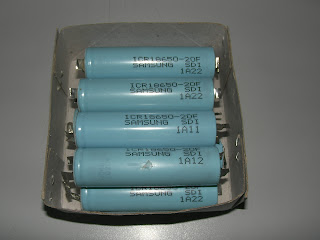 Here's the charging circuit.  It: 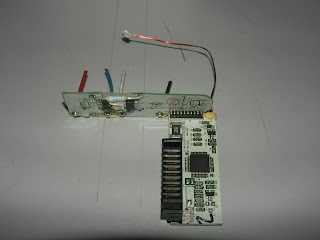 The above charging circuit probably follows (more or less) the charging strategy as recommended by Samsung, the manufacturer of the batteries, who recommends:


Lithium Ion:  Not Your Father's Battery

The reason why Samsung has asked people using their Lithium Ion batteries to charge them using "Constant Voltage With Limited Current" is because Lithium Ion batteries have a fairly low ignition point.  This means that if you push too much current into them too fast, they can catch fire.  If you are really aggressive about charging them, they can EXPLODE.

This is a real departure from previous battery technologies (lead/acid, NiCad) where you had these "fast chargers" that just cranked current into the batteries as quickly as they could generate it.

OK, the batteries got pretty hot to the touch (sometimes too hot to handle in the case of NiCad) or even bubbled a little bit of explosive hydrogen gas (in the case of lead/acid).

Big deal.  In both cases, good ventilation reduced the risk to reasonable levels and we learned to leave the batteries in the unplugged fast charger for 10 minutes before touching them and not charging the car battery in an enclosed area with smokers hanging around.  Old hat.

Li-Ion batteries represent an entirely different echelon of risk compared to what we were used to before.  Presenting too much current to a Li-Ion battery can be really catastrophic as the medium of the battery itself has a relatively low flash point and they combust quite aggressively once that flash point has been reached.

FAA Training Video - How To Handle A Laptop Battery Fire

So when it comes to charging Lithium Ion batteries, there's a specific way to do it.  No shortcuts.

That said, the manufacturers have been quite forthcoming about what the batteries need to be recharged safely.  So, all we have to do is present the charging voltage and current along a standard charge curve and everything will be OK:

Looking around, I found a great article on Lithium Ion batteries at www.batteryuniversity.com.

Here's a few of the things I gleaned from the article:


This graph comes from that article, Charging Lithium Ion Batteries: 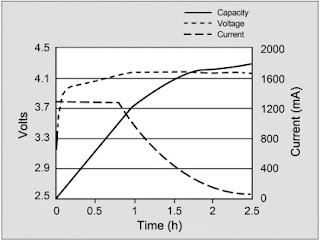 Let's try to make some sense of it.

What I see is that Lithium Ion battery charging happens in three distinct stages:


There you have it.

Some of the other lessons I learned were these.  If you plan to charge a Lithium Ion battery:

On a practical level, I learned this:
...to be continued...