Rewiring the Robosapien V2 Power Cables (Feet to Control board)

A Note about the Power Cables in the Robosapien V2.  You should probably use a thicker wire here than everywhere else.  The connectors imply as much, seeing as they are 2.5mm instead of the 2.0mm that is used everywhere else in the Robosapien V2.  This is likely due to the amount of current moving through these wires at load, like when your RSV2 is doing a complicated motion with a lot of motors firing at the same time.  I read somewhere that a person put an ammeter on their RSV2 and the 6 x "D" cells supplied around 2A @ 9V.

If I ever buy a clamp I'll verify that and be sure to update this blog to validate the assertion.

For the power wires, I suggest that you use speaker wire:

Here's the power cables from the "D" battery compartments in the feet.

I do not (currently) know if the power connectors are right.

They were totally roached when I got this robot, so I am really hoping that they are symmetric. 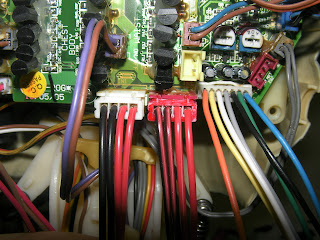 About a day or two after I got the Robosapien V2 up and running the robot started stopping during its initialization phase when bending backwards.  In mid-sentence.

Thinking that I had a loose connection (or a short circuit) I started sweating and jiggling wires to see if I could isolate the problem.

After a minute or two, it turned out that the crimp on the wires in the RED power connector (at RIGHT "As Viewed") were somehow wrong.  My guess was that the crimp was not tight enough, or improperly done considering how new I am to using the DuPont crimper.

I was sweating a bit because I had run out of 2.5mm DuPont connectors, so I disassembled the connector and just enthusiastically re-crimped each of the four leads.

I'm happy to say that after the re-crimp, the robot is now turning on and initializing reliably.

at 12:10 AM
Email ThisBlogThis!Share to TwitterShare to FacebookShare to Pinterest
Labels: Electronics Channel, Robosapien V2