When making pizza dough one day (on the slowest setting) our TEFAL 8143 mixer just stopped working.

The blender is a TEFAL 8143 bundled with a few accessories, (whisk blades, dough knead blades, bowl).

One of the blades has a little plastic gearing integrated with it that mates to a plastic bowl, making it turn  Both of these then fit into a large plastic assembly that puts everything together.  When operating properly the blender blends and the bowl spins without the need for the user to hold them together. 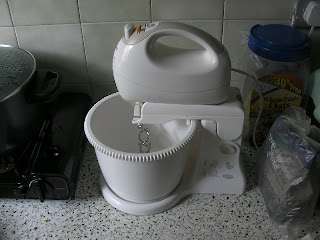 Problem was, it stopped spinning

First Link:
Doubt the supply of electricity from the panel.

In my case, I got glowing wires, so I moved to the next link of the troubleshooting chain.

Second Link:
Seeing as it was a British style plug (they are large, 3-pronged and have a fuse in them): 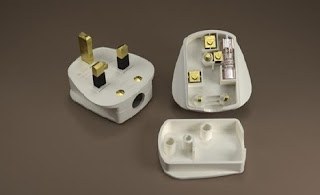 In my case, I got zero resistance.  Yaay!

Put plug back together and optimistically plug in mixer / blender.

Third Link:
Getting complicated now.  We've eliminated everywhere else the problem could have happened but for inside the blender itself.  It's time to think about opening up the blender / mixer and start messing with internals.

HUH?  Funny little screws here - two are normal "star" or Phillips head, two are NOT.  They look like a colon : has been pressed into the top of the screw head (I am to find out later these are called "M" type screws, and are used when the manufacturer does not want the consumer to open the appliance, typically because there are "no user serviceable parts inside").

I don't have this screwdriver.

Work comes to a complete halt.

Fourth Link:
Call TEFAL and ask what can be done about this situation.
They say there's an HKD80 / USD10 dollar charge to just accept the unit for inspection.
Moreover, any other parts are extra
This entire process could take up to a week

THAT'S MONEY THAT COULD GO TO BUYING IMPORTANT STUFF...LIKE TOOLS!  :)

Fifth Link:
Off to local electronics mecca (Ap Liu Street).
Poked around for about two hours.
Found an "M" size screwdriver that fits the screw in the mixer / blender for HKD13 / USD1.75. 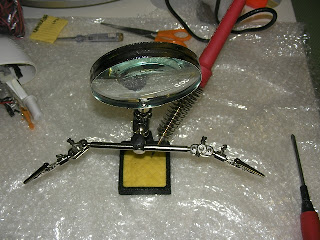 Also bought a bunch of unrelated goodies for other, upcoming projects and to goof around the house with (de-soldering pump, banana plugs, jigsaw blades, tweezers, and so forth).

Puzzlement and perplexity!  Power is making it ALL THE WAY to the motor windings, which is a 50/60HZ 220VAC rated unit.  Personally I was pretty sure that the problem was going to be early in the power distribution / supply in this unit.  I was thinking along the lines of maybe a bad rectifier diode (blown open) or a blown up capacitor.

There's nothing much in this appliance aside from the motor and a rotary type control switch..  Just a few assorted resistors and little ceramic caps (all of which looked fine).  Due to the design of the motor, there ISN'T a rectifier circuit.  WTF?  Uh-oh.  Looks like maybe something even more worst-case happened...like we blew one of those little fine wires in the stator of the motor.

Maybe there's a short circuit somewhere in there?  The motor assembly is replete with LOTS of little, hair-thin wires, most of which are linked to the six-position switch that introduces 220V into different stages of the stator winding, which probably serves to give it a multi-speed capability, maybe with a resister network somewhere to drop the AC.  But a short would just make the switch irrelevant and the motor not change speed...not utterly kill the unit...unless the wires melted when they shorted.

Stator built like a normal transformer, stamped metal layers stacked together and then wound with ultra fine (22 gauge or higher) unshielded wire. 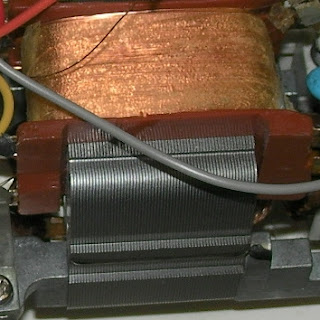 Guess it's time to flick the Fluke multi-meter over to resistance and start looking for where the broken lead might be.  God, I hope it's not in the center of the winding.

Windings all look OK, but there's something weird about the first one after the power entry.  Doing all of these tests in-circuit can be tricky because current from the meter flows all over the place and can give weird results rather than testing discrete components.  Hmmm.  Well, how about removing the tape around the center of the rotor (the above shows the tape already removed) to get a better idea of where these little hair-thin wires are going?

AHA!  Under TWO layers of paper lurks what looks suspiciously like a diode! 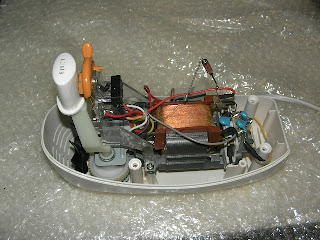 Silver can type and completely camouflaged from view....let's have a closer look. 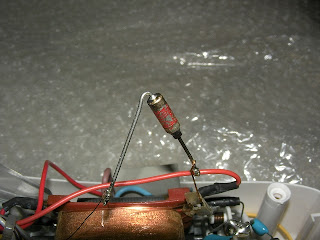 And guess what?  Infinite resistance.  Watson, I think we've found our man!

But WHY is this fuse located in the (literally) last place someone would look for it?  Does it it also have a thermal cutoff feature in case the motor gets too hot?

Pull out soldering iron.  Now you know why I bought that soldering station, to unsolder two leads... :) 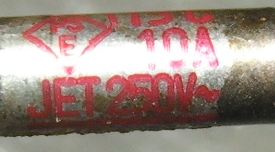 
Assemble a new fuse holder from a couple of extra, broken British style plugs bouncing around in the parts bin and some speaker wire.  My choices for fuses to put in the holder are 3A, 5A and 13A so I go for the highest value. 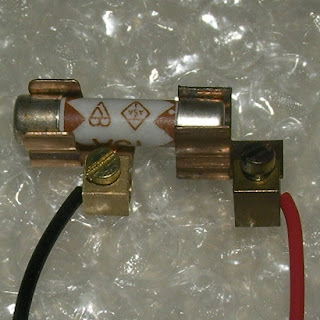 Wrap the new assembly in insulating material secured by tie wraps (just in case, for anti-vibration) and tuck the entire thing into cavity found in blender / mixer body.  Pigtail, then solder leads.  Insulate everything in sight from each other with white electrical tape. 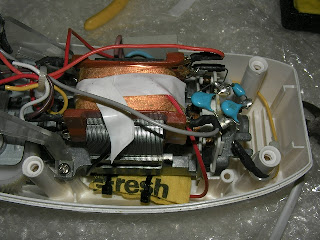 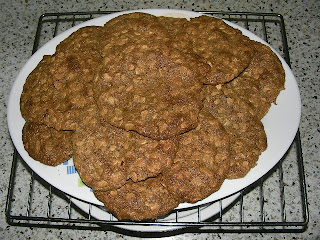 AFTERWORD:  I have since determined that the FUSE that was in my unit was an SEFUSE (Thermal Fuse) designed to cut out at 113 degrees centigrade.  Apparently the motor in this unit runs pretty HOT (ergo, the little integrated plastic fan off of the end of the rotor).

Well, the 13A fuse I put into the unit is NEVER going to blow due to too much current being pulled by the motor (the plug fuse is only 3A), and it will *never* blow due to heat, so I think I'll just open up this little mixer and put a 3A fuse (or lower) in there some day.  The fuse in the plug is rated at 3A.  Also, I think that we'll stay away from lower RPM settings when mixing thick stuff as the current draw is probably the reason why the motor heated up causing the fuse to blow.  OR, I'll put in a thermal cutoff that actually resets once it cools, instead of the one shot wonder that TEFAL put in there.  A fuse costs about USD0.50, a thermal cutout about USD1.50.

I wonder how much "service call revenue" (and landfill) this dollar difference has caused over the years...

UPDATE:  After thinking about it a little bit, I have decided that the thermal cutout protection is the real reason why that fuse was where it was, not the current protection (after all the plug fuse is 3A).  So I will be pulling out my "industrial strength" hand made fuse and putting in the little tin can fuse.

FINAL:  I replaced the fuse with another, slightly higher temperature rated unit.  Read all about it at TEFAL 8143 Hand Mixer / Blender Redux