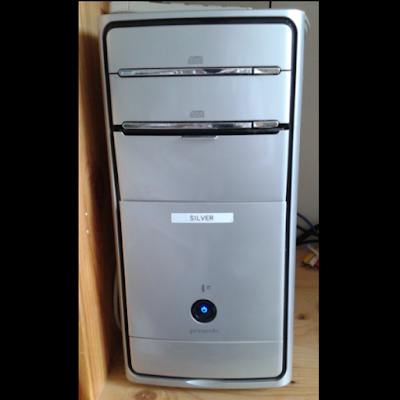 One man's trash is another man's treasure, if you know what to do with it...

This is the story of silver, a computer I "rescued" from an uncertain and almost certainly terrible fate. Here's how the story goes: A few years ago, I was throwing some garbage out when I came across a forlorn PC that had been dumped in the trash area of our apartment building. It was sitting there with its case open, begging for either attention or a quick dispatch to the scrap heap.  Curiosity piqued, I lugged the machine home and set it up on my workbench (at that time, our dining room table), and took a look inside.  Whoa!  Was it ever dirty!  So the first thing I did was to immediately take it outside, to the balcony, dry paintbrush in hand in an effort to try to get its guts clean.

(This part of this story is very nasty.  The less said the better.  I am very glad I was outdoors)

Problem #1:  Not Enough Parts?
Bringing the now clean(er) computer back into the house, I set it on the workbench and once again took stock of what was in front of me.  I felt pretty lucky:  The computer had a CPU, memory, power supply, a silver colored case and DVD-ROM drive.  What it didn't have was: (A) Case screws; (B) Hard Disk Drive; (C) Keyboard; (D) Mouse; (E) Power cord; and (F) Monitor.  Luckily, I'm a bit of a pack rat, so sourcing these items was fairly easy.  I just accessed my spare parts inventory (i.e. a bunch of junk piled in boxes under the bed) and  assembled all of the bits and pieces necessary to compose a functioning computer system...or so I thought at the time.

Solving the problem of the case screws was easy - I have a big jar of them.  For the HDD, I grabbed an ancient hard disk that was kicking around, an 80Gb Seagate ST380011A that resulted from either a machine teardown or an upgrade in the distant past.  I always have a bunch of power cords, so that was also no problem.  Keyboard, mouse and monitor?  Just "borrow" them from my PC, at least for the time being.  Problem #1 solved.

Problem #2:  No Power?
Breath bated in anticipation, I pressed the power button on the front panel to...nothing.  As in really nothing, no lights, fans, flickering monitor or any other typical signs of computer life.  Looking around the unit, I noticed to my surprise that there were TWO power switches on this computer.  The first was a push button located on the front panel, the other a rocker-type ON/OFF switch located on the power supply.  Wanting to be sure that the rocker switch was OK, I flicked it to OFF and then back to ON, reasoning that it may have been in an in-between state, or maybe its contacts had become corroded. Then I pushed the button on the front again, to...nothing again.

Super perplexed, I took another look at the inside of the PC.  Luckily, I was able to determine the make and model of the machine because the manufacturer had thoughtfully silk screened this information on the motherboard: 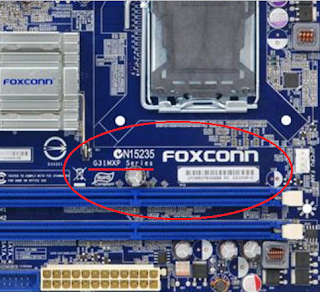 So I was dealing with a FOXCONN G31MXP.  OK!

Using my laptop (after all, I had cannibalized my PC) I went online and was able to find the Specifications, User's Manual and Device Drivers on the website of the manufacturer.  I went ahead and downloaded everything I thought would be useful.  In the end, it was.

One of the things I wanted to check first was if the power on push button was properly connected to the motherboard, or even connected at all.  This information is on page 14 of the User's Manual:

As it turned out, the switch was properly connected.  But out of paranoia, I decided to use a screwdriver to short the two power switch pins together to double-check if it was working or not.  Lo and behold!  The PC started!

This indicated to me that the push button switch on the front of the computer was somehow faulty, so I turned off the machine and took the front bezel off of the case.  Sure enough, the switch was broken - the plastic posts the held the screws in place had become brittle over time and had broken one day, making it impossible to depress the switch deep enough for it to work properly.  Ten minutes and a little dab of hot glue later... 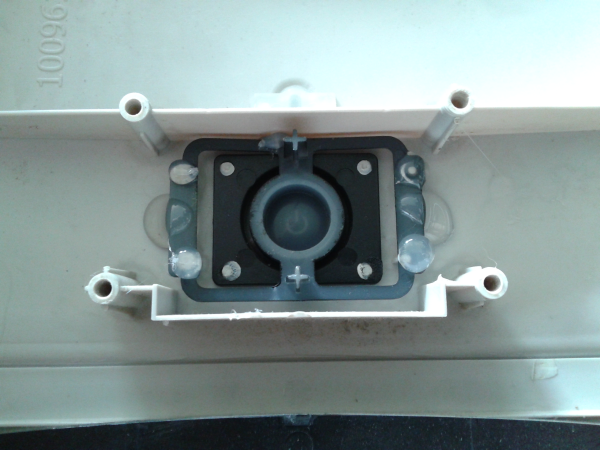 Problem #3:  No Beep?
But that wasn't the end of it the problems with this machine.  While I was troubleshooting the power switch, I noticed that it was totally silent, which isn't normal.  Normally, when you power up a PC, it gives a little "beep" to let you know that everything is OK.  Some people don't know that the little "beep" is actually a troubleshooting code, and that when there's problems, the beep indicates the type of problem.  Strangely this machine wasn't making any sound, which is not right.  Returning to page 11 of the manual, I discovered the location of the leads for the Computer Speaker, which is connector #20: 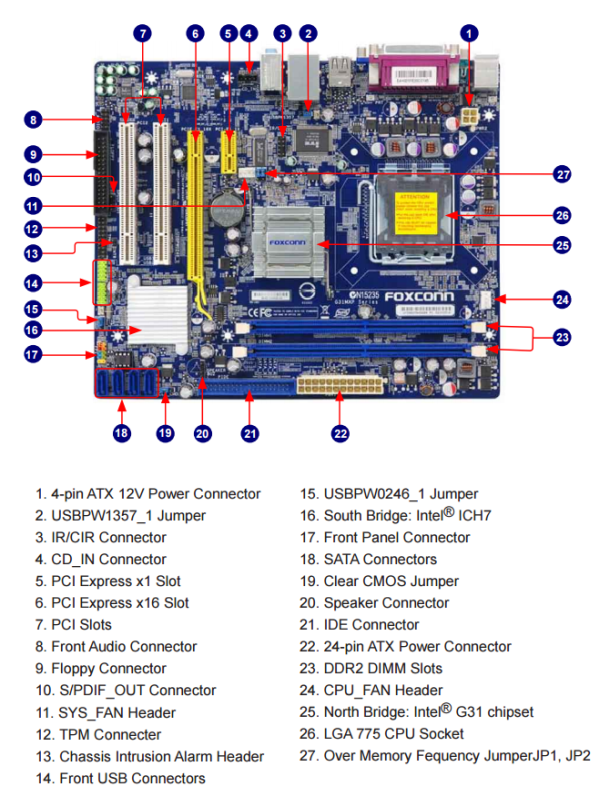 To my surprise, there was nothing attached to the Computer Speaker connector, which is just a header of pins sticking out of the motherboard.  So, off to the computer store I went, coming back with an inexpensive ($2.00) aftermarket computer speaker: 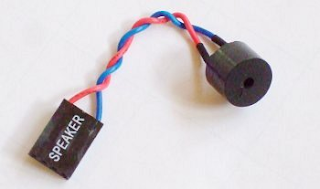 Problem #4:  Bad Memory?
Connecting the speaker was easy, a matter of just a few seconds.  After that was done, I pushed the power button on the front panel and...I heard something very bad.

This computer was still in trouble!  Luckily, from harsh experience, I am very familiar with the various BIOS beep codes that computers can emit.  But for those who aren't, you have to first determine the BIOS manufacturer, then look up the beep code for that manufacturer.  They vary.  Luckily, page 22 of the User's Manual tells you what BIOS manufacturer is being used (look at the first line). 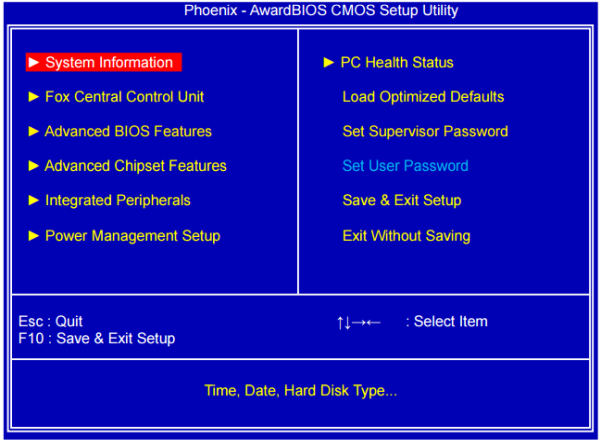 In this case, I already knew that I was dealing with a machine having Phoenix - Award BIOS, because almost all no-name motherboard manufacturers use that BIOS.  Knowing that, and hearing what I did, simply devolved to (in my case) drawing from  bitter memory.

Others may wish to consult an online resource, like the one that produced the diagram that appears below: 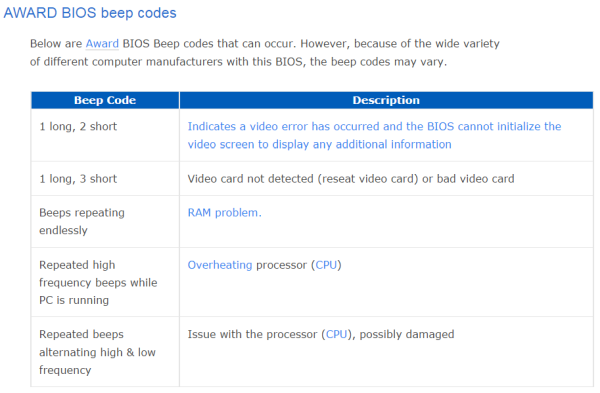 Aha!  A memory problem!  Armed with this information, I tried a few tricks.  First, I removed both RAM sticks from the machine and labeled them A and B.  I then labeled the two RAM sockets 0 and 1, and tried various combinations:

So, as it turned out, RAM A was faulty.  Time to buy some new RAM.  Seeing as the RAM sticks were only 1Gb each, I decided to replace both of them with the largest, fastest memory possible.

Buying replacement memory for older machines is always a bit of a risk, because you can end up buying the wrong type or speed.  Because it is typically being bought on the second hand market, it could even be faulty, so it's best to make sure that the seller is willing to trade memory back for an exchange, if it doesn't fit or doesn't work.  If you can't do that, you have to be very certain of what you're buying.  Caveat Emptor.

According to the manufacturer, the memory specifications for the G31MXP are:

So off I went to the computer store to buy two 2Gb DDR2 RAM sticks running at 800mhz, which is the fastest, largest RAM that this motherboard can take.  At the time I bought it, that type of memory cost about $10.00 per stick. Returning home, I put them into the machine and pushed the button.  The machine booted just fine, and I was able to enter the BIOS configuration area by pressing the <DEL> key, as indicated on the FOXCONN splash screen.  I navigated to a screen similar to this one (I am using my TV as a display now, I don't have a picture of the monitor from back then). 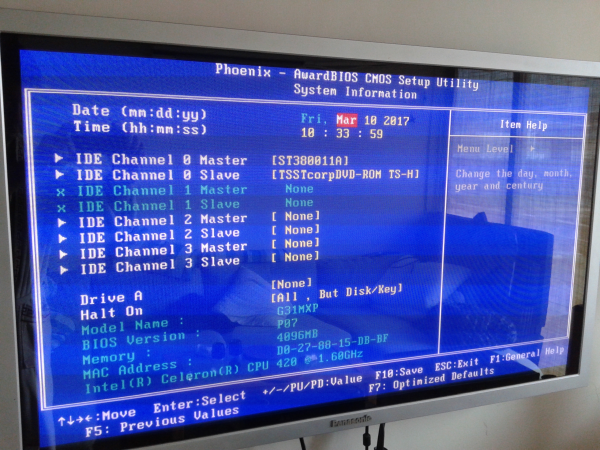 As you can see, the machine has booted, otherwise this screen would not be accessible.  It has detected 4Gb of RAM (4096MB).  It has also detected the presence of a Seagate ST300011A HDD and a TSST DVD-ROM.  Everything looks fine.  Problem #4 solved.

I installed Windows XP on the machine, because that's what all the drivers for this machine are good for.  I also installed the VLC media player, which I think is a great program for viewing AC-3 and other multi-channel encoded content.  I use all of the time.  But the computer was only capable of putting out stereo audio, because that's all that was offered on its back panel:

I used a MINI-DIN 3.5mm plug to RCA connector to bring the audio signal to my amplifier, which worked and sounded great in stereo mode, but I wanted more, if I could have more.  I wanted surround, which potentially meant installing a 5.1 surround sound expansion card in the machine.

Problem #5:  Multimedia?
Realizing that I now had a functioning stereo Media Player on my hands for a grand total cost of $22.00, I eagerly read the User's Manual to see what else the machine could be capable of, hoping for a surprise. I discovered, to my delight, that the motherboard had built-in 5.1 surround sound capability:

Reading further, I realize that the machine (which at some point I had dubbed silver), was able to output PCM encoded sound via a TOSLINK connector - the very thing that my YAMAHA DSP-A3090 7.1 surround sound amplifier could accept!  I was already an experienced user of TOSLINK because of some consumer devices I'd bought years ago, like a Lucky Goldstar LST-3410A HD DVR:

The machine had a TOSLINK connector on the back panel, which was my initial introduction to this interesting technology:

The connector was located in the center of the unit:

Enough tangents down memory lane. I still had a problem. While there was a very beguiling mention of 5.1 audio mentioned in the G31MXP User's Manual, there was no visible TOSLINK connector anywhere, nor much in the way of instructions on how to take this mentioned functionality from potential to reality.  All I could find in the manual was the existence of a high definition audio header called F_AUDIO: 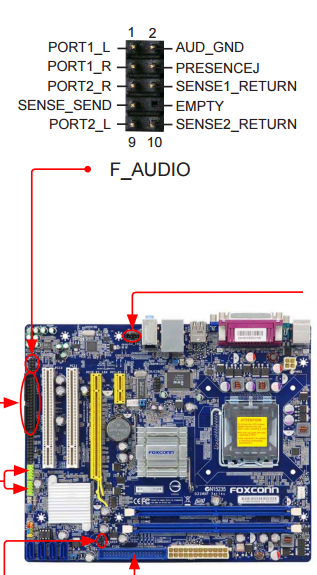 But there was no mention of what to do beyond that, nor what one needed to do if one wanted to take advantage of that functionality.  What a bummer!

After much searching around on the Internet, I discovered that the original motherboard had probably shipped with a S/PDIF adaptor, but the adapter was never installed because the person who originally bought that machine never needed that functionality.  So it's probably still in the motherboard box, or in a drawer somewhere - never to be used.

Anyway, I made yet another trip to the computer store to get another S/PDIF adaptor so I could make the TOSLINK connection between silver and my amplifier happen.  For your reference, S/PDIF is a general term for digitally encoded audio that can be delivered by copper (RCA) or by fiber optics (TOSLINK).  Here's what my new S/PDIF adaptor looked like:

This particular unit was made by ASUS, a competitor to FOXCONN,  but it still worked OK: 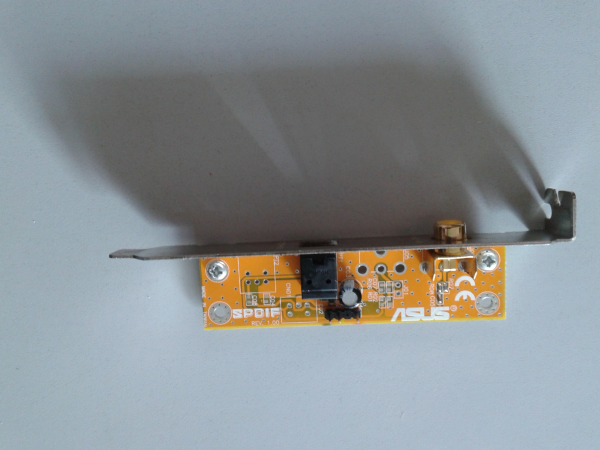 Here's the opposite side, with what might be a revision number on the sticker (1.00-A02) 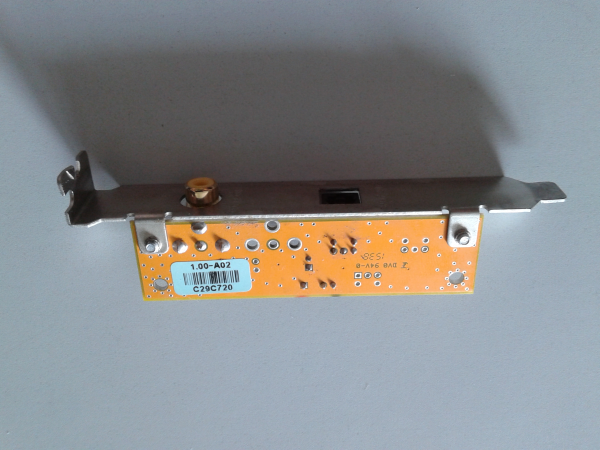 Here's the connector side, it features coaxial (yellow) and TOSLINK (black) digital connectors: Here's a shot of the header for the cable connection.  While the cable is keyed, some might not all be, so I indicated which wires go where with a permanent marker: 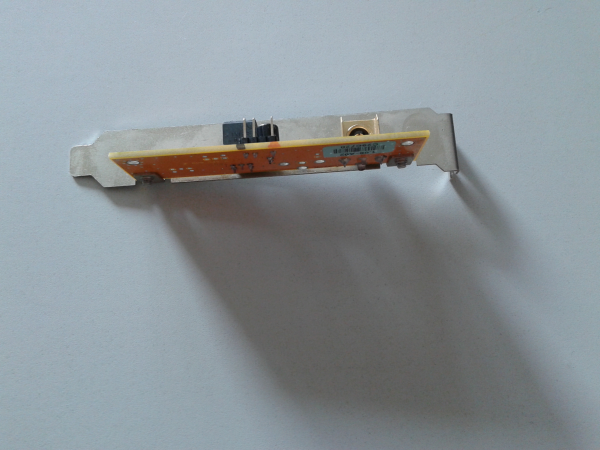 Here's a close up of the header: 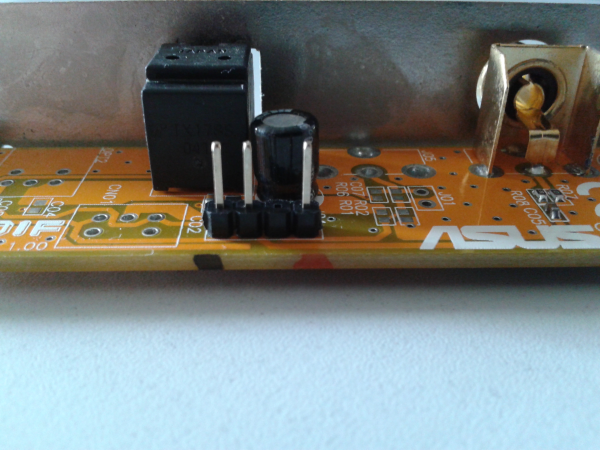 Long story short, after a little shopping and fiddling around, silver was able to deliver PCM encoded 5.1 audio to my amplifier and the circle was closed!  Problem #5 solved.

That's the story of how I turned a piece of trash into a $27.00 Surround Sound Media Player.