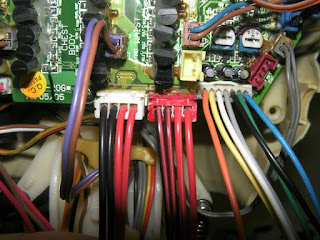 As received, my Robosapien V2 was in pretty bad shape, as was expected considering the way it was advertised:

But aside from being incomplete, having its arm wires CUT and just plain looking terrible, there were other serious problems lurking below its surface.

The WIRING INSULATION WAS ROTTING AWAY.

Really surprised by this, I looked on the Internet for potential reasons why this should be the case.  The robot is under 10 years old.  I routinely work on electronics that is 10, 20 even 40 years old.  The insulation on the wires is made of plastic, not cloth.

As we all know after countless public awareness campaigns, plastic does not bio-degrade - it's supposed to be in the landfills for the next 200 years or something like that:

For those of you who don't know, the majority of wire insulation is a type of plastic called PVC, which is an acronym for Polyvinyl Chloride, a truly amazing substance that is used to manufacture all kinds of useful stuff - like sewer pipes.

If you really want to know more that 99% of the world when it comes to evaluation of PVC wire insulation degradation, I suggest you have a look at this article, published by a couple of experts in the field.

For your convenience, here's the abstract:

"Assessing the degradation of electrical cable insulation is an important feature in extending plant life. The older generating stations are extensively wired with PVC insulated cables, and procedures have been developed to assess degradation using micro specimens in a manner that does not destroy the function of the cable. Material degradation of accelerated aged specimens was systematically monitored by measuring melting or glass transition temperatures (Tg), gel content, infrared peroxide absorbance, relative hardness, and plasticizer loss. The shift in the Tg or the characteristic melting peak predicted the maximum exposure temperature of the PVC. The peroxide absorbance and gel content measurements were sensitive indicators of degradation. The relative hardness as measured by thermo-mechanical analyzer (TMA) penetration distance and plasticizer content decreased as the material aged. The results obtained on micro specimens were related to the ultimate elongation values, which have been the traditional measure of degradation."

The bottom line?  PVC insulation is supposed to last a really long time

Thus the mystery.  After substantial investigation, I came to understand that certain production runs of the Robosapien V2 were plagued with a serious quality control problem with respect to the PVC insulation on key wiring harnesses.  After an astonishingly brief amount of time, the insulation simply disintegrates in place, which poses a very real risk of causing a fire when you consider the amount of current that its SIX "D" cells can generate:

Unfortunately, there are a LOT of videos, messages and other types of communications regarding this problem.

The list of disillusioned and shocked (pardon the pun) consumers just goes on and on, right around the world.  I think Wowee, the manufacturer of the Robosapien V2, developed a very poor reputation in the robot enthusiast community as a result of this incident.

This is partly due to an initial attempt to refuse to acknowledge the problem, and then only a half-hearted and grudging eventual response.  Eventually, they did take back defective robots, but only in jurisdictions with very strong consumer protection laws and frequent class action type lawsuits (like the USA).

In other jurisdictions, they simply declined to react - which I think was a bad idea.  It  soured the entire consumer community on the Robosapien product line and the company brand.

A textbook case of how NOT to respond to a product quality control issue in this age.

Of course, there could be something else at work here with respect to how Wowee chose to approach the issue.  Maybe it had something to do with the logistical difficulties in China when attempting to act on a product recall, which can prove quite difficult and which was recently blogged about here:

But I don't think so.  Wowee used to be a sub-contractor for Hasbro, which is a USA based company with a keenly developed awareness of the impact of low product quality, especially in the TOY sector, which is very highly regulated.

My guess as to what happened, based on my living and working in Asia for over 12 years, Hong Kong for over 9 years, China for almost 2 years and making plenty of stuff in Mainland China since 2000 is this:

Unfortunately, this stuff happens all the time here in Hong Kong, where people have been socialized to think that a specific kind of sociopathic short-sightedness is OK.  This often comes out in the form of a debased BOM that only comes to light after disaster has struck.

All is sacrificed at the altar of profits.  I've never seen anything quite like it before.  But hey, what should you expect in a society where there are basically NO consumer protection laws?  Where after-sales support (if you can get it) is by courtesy only and typically limited to SEVEN DAYS.

The result is slightly mad.  You should see Groupon Hong Kong on a busy day - the place is full of people ASSEMBLING their goods on site because they believe that if they cross the threshold of the store without PROVING that the goods are 100% functional they will not have any means of redress should those goods turn out to be defective or incomplete.

It's kind of surreal to see this all-too-common situation go down:  Visualize a space of about 400 square feet (20 feet x 20 feet).  Imagine between 2 and 5 bicycles being assembled in that space by inexperienced housewives with their children in loud attendance, struggling to put a complex machine (the bicycle) together with no help, no tools and horrible, half-written instructions.

Imagine everyone in a high state of annoyance, yelling at their kids at the top of their voices, dropping parts that roll around everywhere, toppling unsteady, half-built bicycles onto each other and so on.  And oh, did I mention that they're doing this in while 30 or 40 other people are patiently waiting in line to get their goods and do the exact same thing?

It's an experience like no other, I assure you.  The only place that's crazier and more chaotic than Groupon on sale day is the main train stations in China at holiday time.  That's out of this world.

And the Internet, which never forgets or forgives, is forever full of these kinds of messages:

Here's a quote from a borglabs, a really great website

"My initial experience was not pleasant. Two weeks after I won my prized robot from eBay, it began to work intermittently– shutting down unexpectedly when it bent down or sat. A quick Web search revealed that my Robosapien V2 suffered the fate of many of his kind because of a serious manufacturing flaw. His internal wires are insulated with cheap plastic that crumbled over time, causing the exposed conductors to short when pressed together by certain robot movements. When this happens the robot would freeze, shut down completely or in some “rare” cases, terminate itself in a toasty finale."

Ready
at 1:17 AM
Email ThisBlogThis!Share to TwitterShare to FacebookShare to Pinterest
Labels: Electronics Channel, Robosapien V2