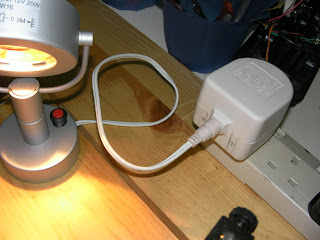 IKEA is a great place to pick up stylish, inexpensive home items.

Vego and I have been shopping there ever since we met 20 years ago and it never disappoints.  I think that IKEA has a particularly good lighting department.  I browse this section of the shop often.  Also, I am addicted to the "hurts" area, where display items, end-of-run, unpopular, returned or slightly damaged items come to rest (and rescue).

Some years ago, when they were relatively new, I picked up a nice HALOGEN lamp at IKEA.  I then proceeded to use it for a bunch of years (like 10).

Seeing as I had a TON of extra lighting lying around and in unopened boxes, I just placed another lighting unit in service, boxed this one up and tossed it into the "some day" pile.

Well, I have recently decided to get back into messing around with electronics after a 20+ year hiatus.  But electronics either got a lot smaller in the last two decades, or my middle-aged eyes need a lot better lighting than they used to - and I'm not saying which!

Seriously, electronics is a LOT smaller now.  These days I find myself working a lot with 1mm and 2mm die components.  Tiny stuff.  Surface mount stuff.  Itsy-bitsy stuff.  I could go on, but I won't.  You get the idea.  It's a micro world now.

The ambient lighting at my little nascent workbench is crazily inadequate.  Partly, this is due to the fact that we have been forced to switch from incandescent to flourescent lighting, something I hate but have been putting up with because of the carbon footprint thing.

Now, flourescent lighting flickers like crazy.  Believe me, your cones may not be able to tell everything is flickering because they are slower and responsible for discriminating colours, but your rods, which work in black & white and pull the majority of the edge detection duty in our vision system, are much, much faster and they are really under served by it, which is why contrast and depth perception are sucked out of flourescent-lit ambient environments.

Anyway, the bottom line is I now need a better light source, regardless of the reason.  If I were I to be pressed to justify myself, I would say that I would prefer a lighting system that provides light wavelengths closer to sunlight, the environment in which our eyes evolved, than flourescent, for which they did not.

Flourescent is a weird shade of green, flickers, reduces 3D perception and washes everything out.  It uses mercury and the bulbs are now considered toxic waste.  The bulbs, secured as they are by only two pins in a bayonet arrangement, often fall out of their fixtures.  I have a friend who lost an eye to a mis-loaded flourescent tube.  The ballasts can leak really nasty oil.  They often audibly buzz.  When the capacitors go bad, they visibly flicker.  Aside from these small consideration, flourescent is just great!

Cue halogen.  It solves a lot of the above issues.  It's also good for illuminating a small area because the bulbs are designed to put out reasonably coherent light with their integrated reflectors  I need my light to be pretty focused because the stuff I'm working with is small.

So I guess today is "some day" for that busted IKEA 12v Halogen Lamp!

Light fixtures (even Halogen ones) are pretty simple.  They are normally composed of:

So I figured I'd just test each one in turn and find the bit that wasn't working right.

Halogen bulbs use a filament, not a charged gas chamber like flourescent lighting.  This means that Halogen bulbs can be tested with a multimeter.  So the first thing I did was to pull out my trusty 10-year-old FLUKE 12B Multimeter and tested the bulb for resistance.

Well, well, well - the bulb showed ZERO resistance, which means that it is fine.   Not bad for a 10 year old bulb.  But then I noticed something wrong that the bulb was FAR OVER RATED for the fixture - WTF!  The bulb was a 40W MR16 type bulb in a 20W MR16 type fixture.

How on earth did IKEA get away with selling a bulb 2X the rated wattage for the fixture?

No wonder it ran hot!

So I went ahead and dug a MR16 type 20W bulb out of a box of bulbs I have hanging around, tested it and installed it in the fixture, no problem.  I tested it with a 12v DC "brick" type transformer that I had hanging around the house that was being used to powere something else.

OK, sigh with relief now that I'm not going to burn the house down.

But the IKEA 12v Halogen Lamp still doesn't work, even with a good bulb,

Now this thing is not a standard wall plug type light fixture, nor is it an "in the ceiling" type fixure.

It is a "Wall Wart" fixture that features a big lump of a transformer that plugs directly into the wall.  It has a loooong wire with a dual blade thing at one end and a switched light fixture at the other end.  This enables the manufacturer to swap out the transformer without needing to re-wire the fixture.  OK, nice to know...but there is no place for a standard fuse to go.

The transformer (a "Wall Wart") for the IKEA 12v HALOGEN LAMP is a totally integrated, single physical package that transforms 220v AC to 12v AC. 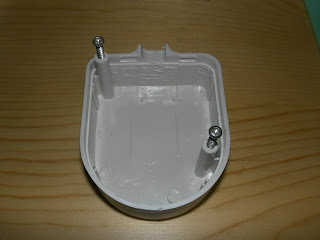 The Transformer is held together with two TORX type screws.  I used a T10 or a T12 screwdriver to open it up.  Don't remember now which I used.  Sorry.

Based on my experience with a thermally fused transformer in the TEFAL 8143 Hand Mixer / Blender Fix, I decided to have a look and see if my IKEA 12v HALOGEN LAMP also had a THERMAL FUSE installed in its transformer.  They seem to be everywhere these days.

LO!  I found a thermal fuse!  Not exactly like what I'm used to seeing (I'm used to seeing a metal can, diode type packaging) but this thing is indisputably a fuse - I looked it up online.  Thank you, Internet.  Don't know how I used to do it without you. 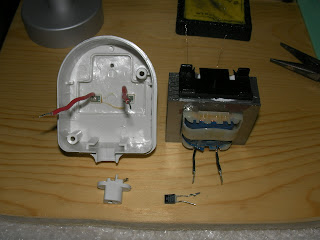 Here, looking at the inside, we have two AC power leads coming in (red wires) the transformer on the right (220->12) and connector for the looooong wire between the transformer and the light fixture and finally an  IC packaged SEFUSE, already removed from the guts of the windings of the transformer (buried as it was under tape and cardboard). 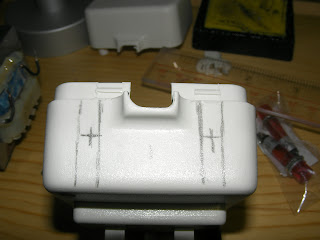 Seeing as this thing produces 12v AC, I thought that I might someday install a couple of posts to pull that kind of voltage (+12v, -12v) onto my test bench because that voltage will be useful for a lot of the stuff I plan to do. 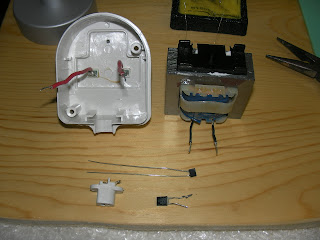 Here's a pic of the new SEFUSE I bought to replace the cooked one.  The new fuse is the one with the long leads.  It's rated for a slightly higher "cooking" temperature but a smaller amperage, which is probably why it's a bit smaller.

Out of curiosity  I thought I'd take a look at the switch. 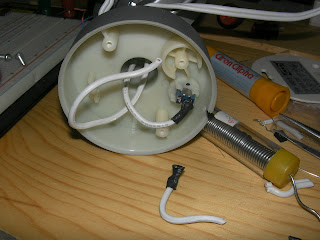 Good thing I did.  The switch lead BROKE OFF in the body of the fixture when I wiggled it.

Luckily, I had a suitably rated switch in a parts bin from one of my many visits to Ap Liu street.  So it was a matter of about 30 minutes to tool the fixture to accept the new switch (which had a much bigger bore), solder in all the leads and so on.  The new switch has a very natty RED button. 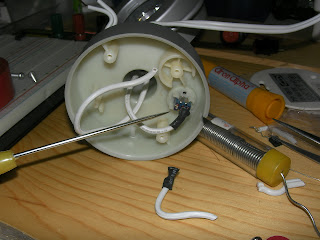 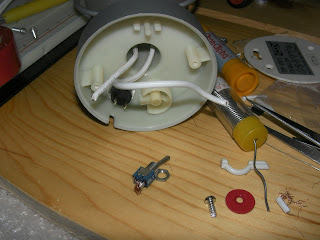 Broken switch removed.  Based on what happened when I attempted to pull the spade connector off the switch, I think the crystal matrix of the metal from which the switch had been manufactured had "set" over time.  That or a bad curing period or a bad alloy recipe. 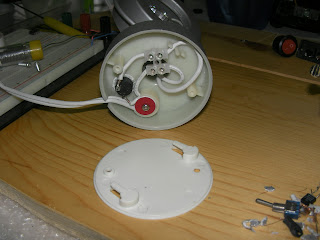 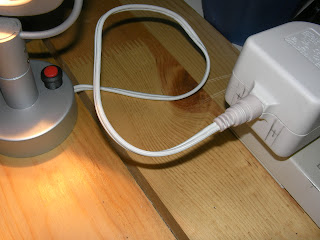 Unit returned to service, mounted to test bench, on and working