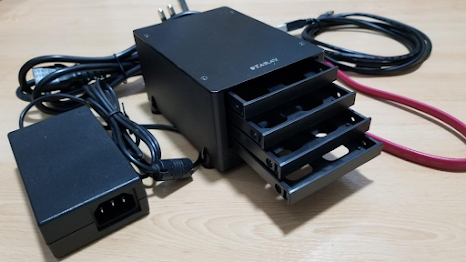 ·         All drives have quick release mechanism, so no screwdriver is needed

Here is what the seller had to say about "issues and troubles" with respect to the STARAY:

It was a substantial feeling black anodized aluminum unit with very few scratches.

On initial cleaning and inspection, no unusual incidents occurred.  The fan was able to freewheel when compressed air was pushed through it, giving the characteristic rising pitch whine that all fans give.

Cleaning the unit resulted in some of the letters coming off, so a little additional effort was put in to remove them all.  What was left behind was a much cooler-looking "black shadow" letter effect:

An external examination revealed little, except for the fact that the fan seemed to be missing a blade! 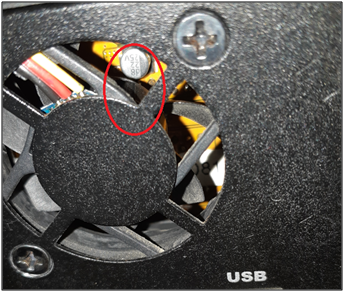 Four Phillips head screws secure the top of the unit: 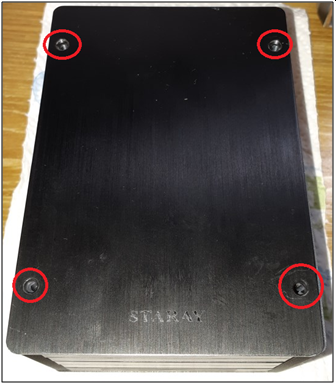 And with those removed, the top can be removed, revealing the internals: 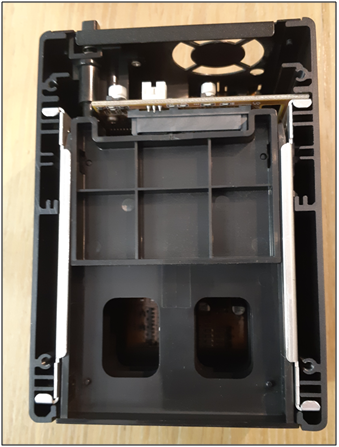 The Little Fan That Couldn't

Removing the fan was a simple matter of unscrewing two large screws and unplugging the unit from the circuit board.  Also, a little zip tie needed to be cut: 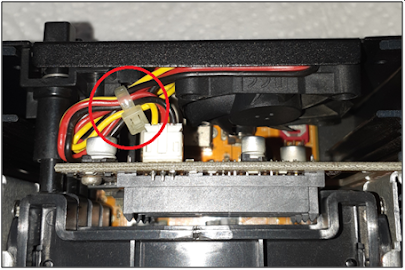 With the fan removed, it was very obvious that it needed to be replaced.  Not only was the fan not turning smoothly, it really was missing a blade! 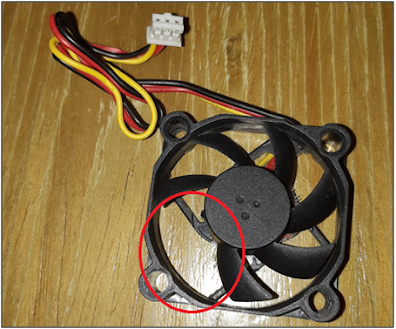 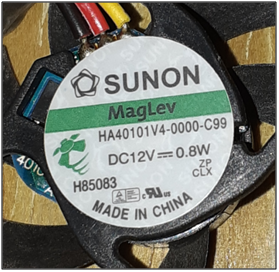 I easily found a replacement unit online, the only thing that I needed to be careful about was some model details, because that particular fan is used in dozens of different applications and sports a couple of dozen configurations.  For this application, the configuration was 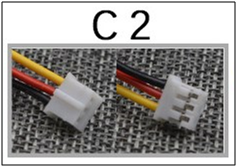 Getting the STARAY J4-4S-SB2 back into working order was really easy.  The unit arrived in great shape.  It was easily diagnosed and easily serviced.  Replacement parts were easy to procure.

at 4:33 PM No comments:
Email ThisBlogThis!Share to TwitterShare to FacebookShare to Pinterest

I bought a 2nd hand Brother HL3170CDW color printer the other day on a local used goods website: 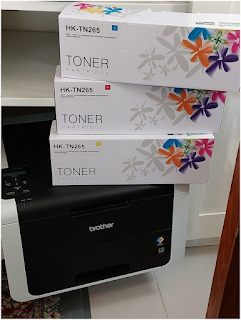 The printer was listed for a good price, and came with three toner cartridges, so I jumped on the deal.  But, while the machine arrived in great cosmetic condition, it did have one major problem...it arrived DOA.

Whenever I buy a used piece of equipment, I clean its exterior and blow it out with my compressor before bringing it into the house.  While doing this, I noticed the Brother HL3170CDW color printer cooling fan didn't make the characteristic whirring sound that fans typically produce when compressed air is pushed through them.  They usually freewheel and make a loud high-pitched whine with a rapidly increasing pitch.  But in the case of the Brother HL3170CDW color printer, the only sound I heard was a kind of dull click, despite several attempts.

This Printer Was Definitely Troubled

After cleaning up the Brother HL3170CDW color printer and bringing it inside, I plugged it in.  The machine powered up, but the only thing I got from it was the following error message on the control panel: 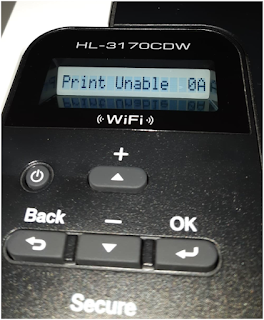 Looking online, I discovered this error indicates a mechanical failure of some kind.

No further details were given.  You are supposed to bring the machine into the dealer.

Into Troubleshooting Mode We Go

Springing into troubleshooting mode, I tried a bunch of the typical things that help to isolate problems with printers.

None of these measures worked.

How Laser Printers Start Up

Laser printers are actually examples of what would today be called an Internet of Things (IoT) device, embedded system, single board computer or even single-purpose computing device.  All of these different names really just mean that this machine is designed to satisfy a narrow list of requirements for which it has been pre-configured.

Part of the pre-configuration for most special-purpose devices is to perform something called a Power On Self Test (POST).  This is a small routine that checks to make sure that the basic building blocks of the device (CPU, RAM, NET, DEVICES) are available and sufficiently provisioned for the device to achieve a known initial state.  This is because devices like a Brother HL3170CDW color printer act as a finite state machine, and need a known initial state.

Knowing this, I started to think about the way that I would design the POST for a modern device like the Brother HL3170CDW color printer.  If it were up to me, I would check to make sure the following was available and working:

D.      The means of moving paper though the machine (DEVICE)

E.       The presence and proper availability of toner (CONSUMABLE)

F.       The presence and proper availability of a fuser to bond toner to paper (DEVICE)

But, due to my inkling of first signs of trouble, I felt I needed to add one more device to this list.  The fan.

Fans have been a fact of life in computing for a long time.  They are a cheap and easy way to keep computers cool.  They have been present in the power supplies of powerful Intel-based Personal Computers like the IBM PC since the 80's and have been directly mounted to the top of the CPU in most Personal Computers since the 90's.

Originally, a "case fan" or "muffin fan" was black, about 4 inches wide and it had two wires (red/black) leading out of it. Case fans also used to be simple - they ran at a constant speed of around 2000 RPM.  This could be kind of loud for some people, so in the old days we used to solder a 2W @ 100 Ohm resistor in series with one of the wires to quieten down the fan, by bringing down its RPMs to around 1000 RPM.  Besides making it a lot more quiet, this also extended the life of the fan.

In response to these measures, "smart" fans started to emerge about 20 years ago.  You know your fan is "smart" if it has more than two wires coming out of it.  Smart fans can range from silent mode (0 RPM) to performance mode (~2200 RPM) completely through software and integration with a microcontroller.  They control their speed by "slicing" the power coming into them at differing angles, a technique known as Pulse  Width Modulation.

How to Troubleshoot a Fan

So I unplugged the printer once again and got a thin piece of non-conducting wood.  I then used the piece of wood to manually move the fan blades to see if they would rotate through a full 360 degrees.  They wouldn't, which confirmed my suspicions that they were being obstructed by something.

Thinking I was onto something, I undertook the challenge of disassembling the Brother HL3170CDW color printer.  Taking one apart turned out to be fairly easy.  First, I unplugged the unit.  Next, I started removing obviously related screws.

The screws were the same size and both had a Phillips head, so no special tools were required to remove them.

Be very gentle here.  Taking the plastic side panel off was a bit challenging until I realized that I needed to gently depress some retaining clips that are only accessible through little slots in the top right side of the printer.  I did this with a steak knife.  I then had to navigate the two plastic outrigger tabs off of little centering posts that also acted as screw mounts.  Once the clips were disengaged, the cover easily cantilevered off from the top to the bottom, more or less.

With the right side panel removed, the cooling fan for the Brother HL3170CDW color printer was revealed, so I examined it closely.  It is a D08K-24TS6 04B 8025 24V 0.14A axial cooling fan with 3 wires coming out of it, which makes it a smart fan.  Using my the non-conductive piece of wood once again, I tried once again to rotate the fan blades through a full 360 degrees, but they would still not turn smoothly.  I then removed the fan unit entirely from the printer by unplugging it and moving its three wires out of their retaining clip.

Powering up a fanless Brother HL3170CDW color printer was unfruitful.  It immediately gave a Print Unable 0A error.

Having nothing to lose at this point, I decided to take apart the D08K-24TS6 axial cooling fan to see what I could see, and maybe service it.  Now, these four-inch fan units are not really designed to be serviced, mostly because they are so cheap.  But in the old days I used to have to take my computer fans apart because replacement fans were so hard to find in my home country in those pre-Internet times.

Besides, 99% of the time it is the bearings that go wrong in any fan, and you can get a lot more life out of one by just cleaning the blades of dust buildup and putting a drop of 3-in-1 oil in the bearings.  This also goes for house fans, not just computer fans.

To take apart a typical "muffin" style fan you usually have to follow these steps:

In the case of the D08K-24TS6, there was a significant (but not infinite) amount of resistance at first, and then the fan assembly came apart.  As it turns out, the D08K-24TS6 features a "circlip free" retaining strategy that utilizes four posts with locking lobes to hold the fan together.  The fan blade assembly is rotated onto the four posts using special guide channels molded into the inside of the fan blade assembly.

In the case of this Brother HL3170CDW color printer, either the fan had never been assembled correctly, or it had been somehow dislodged from its properly assembled state.

Whatever the case, the four posts were now blocking D08K-24TS6 fan blade assembly, and preventing it from turning properly.

So I cut the four posts off with a pair of small, sharp diagonal wire cutters.

The reason why I knew I could do this was simple.  Fans are simple little motors that use basic principles of magnetism to operate.  They feature a little permanent magnet that chases a rotating magnetic field that is created by a set of carefully wound coils of copper wire.  Even without the retaining posts, the internal magnetic fields would be more than strong enough to keep the fan blade assembly in place, especially considering the fact that this particular fan resided in a molded enclosure.  There was literally nowhere for the fan blade assembly to go.

With the posts cut off, the fan blade assembly slid easily back into place, and the fan was then able to rotate freely.  Powering up the machine immediately resulted in the sweet sound of the fan spinning up to maximum RPM, as well as the other sounds that laser printers tend to emit when they start up:

Once the Brother HL3170CDW color printer had completed its POST, I was presented with this screen: 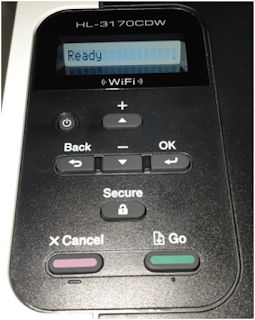 at 1:57 PM No comments:
Email ThisBlogThis!Share to TwitterShare to FacebookShare to Pinterest
Older Posts Home
Subscribe to: Posts (Atom)